I mentioned this story in my article "Programmer, Lawyer, Medieval Weapons Expert, Let Them Choose" but will describe it again here. It was the early 80's and I was in my teens. My father had brought home a second hand Apple IIe computer (our first) and I had started playing with BASIC programming. It was fun, I even made a letter S ski down the screen dodging letter T's (trees). The mechanical logic appealed to me and made sense. As you conscientious readers may recall, the programming life was vetoed by my Mom at the time and I went on to become a recruiter (which also worked out well). In the previous article, I emphasized giving our kids a chance to follow their passions. I still agree with this but I want to add a new a recent epiphany.


Not only is it OK to let our kids do something they enjoy doing but they might actually know better than we do about what the future may hold.

Regardless of my mother's reasons for telling me not to get into programming, I am convinced that if she could have looked 20 years into the future and seen the dominance of technology, she would have had a different opinion about my interests. Was I thinking about trends and predicting future markets when I said I wanted to be a programmer at 13? Absolutely not. I just wanted to make games and play with them. I liked fiddling with the keyboard and making it do stuff for me. It was new and interesting. And, I was better at it than my parents.

Maybe our kids have a better idea of what is coming up in the future than we do.  After all, it is their future. By focusing on the things they like or are interested in they are not predicting the future but actually making it. We grownups are too quick to dismiss new things and fads and push our kids to the careers we see all around us now. From age 10 to when  I was graduating from college and looking for a job was 11 years. The World Economic Forum has suggested that,


...65% of children entering primary school today will ultimately end up working in completely new job types that aren’t on our radar yet.

That is a huge change in just 16 years. Now in 2016 there are jobs that did not exist in 2006. Just consider the iPhone and all the related jobs (it arrived in 2007). Even Drone Operator has become a real job that people are paid real money to do!!!!

What could my Mom have done differently? Like with any job, research is a good next step. If you have an idea about a job that you might like, learn more about it and test that assumption. My uncle has been a computer guy since the days of the ENIAC. 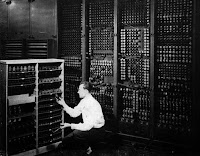 Actually, I think he worked on it... Anyway, it would have been easy for my Mom to take me to see him and learn more about what he did with computers. It most likely would have been educational for both me and my Mom. She might have seen that it wasn't a dark and lonely room and that being good with people would be useful even for a programmer!
on November 13, 2016 1 comment: