The evolution of the HeadhunterDad

When this series of articles first began, back in 2010, I wrote an introduction titled "After You Teach Them How to Fish, You Must Teach Them How to Get a Job as a Fisherman" to explain a bit about why I started writing in the first place. Back then I was thinking of providing skills to my kids that would prove useful to their careers, like typing maybe or perhaps getting them started on programming at an early age. I made it clear that I was learning as I go having only been a parent for a short 9 years at the time.
As I wrote and learned as a parent, educator, and recruiter, my thinking evolved and shifted towards softer skills and how to help our kids acquire them. The following is an updated introduction to the theme of the HeadhunterDad.

These articles focus on what we as parents can do for our kids to help prepare them for the future of work. The goal (at least the first goal) is the help raise a young adult who is able to identify something that interests them and then position them to get that job when they graduate from college. It emphasizes an early start rather than waiting for our kids to reach college. It is silly to talk to your 5-year-old daughter about the differences between interviewing for the job of economic analyst at a major bank vs CPA at a big 4 accounting firm. However, the reality is that much of what employers look for in those interviews is learned by our kids well before they choose a major and often in elementary school or earlier!

When interviewing a new graduate, employers are often going with the presumption that these fresh young kids know nothing at all of any real value. The accounting students still need to pass the CPA, the marketing majors may be fetching coffee and making copies for the first 6 months and even computer science majors have been working within the academic bubble (with a few expectations). So if these companies are not looking for hard skills, what are they looking for?

Seeing through the eyes of my students as they apply for jobs each semester and dealing with hiring managers on a daily basis, I would say that 90% of hiring decisions involving new college graduates are based on:

... just to name a few. I don't know about you but I cannot remember any classes with these titles in college. It is possible, that much of what these employers are evaluating in our kids is learned in the first 6 to 12 years of life when we parents had the responsibility of instilling the right attitude and lessons. Scary, right? You knew you were responsible but never realized how extensive that responsibility was. We really might be to blame for all our kid's failings as adults!

Being average is not failure, as long as you are on the right side of average.

Back in March, I wrote an article suggesting that in the future, when jobs are scarce, being average would not be good enough. It was a great article (the author humbly informs his readers) but not so great that it could not have been challenged. Since nobody else is stepping up to the plate I thought that in the interest of providing a balanced viewpoint I would give my own rebuttal. Fortunately, I had some help and while looking through unpublished drafts of my article ideas I came across one titled "Being average is not failure." I stole the idea from Mark Manson's blog article back in 2015. He had written "In Defense of Being Average". For those of you who do not know Mark, he is also the author of  the bestseller, "The Subtle Art of Not Giving A F*ck". 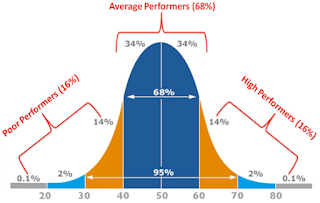 In my previous article, I argued that it would become necessary for our kids to be the "best" at what they do in order to stay competitive. The opportunities for regular kids with regular skills and capabilities would end up competing with artificial intelligence and robots for some jobs and the millions of other regular people for the other ones. The sweet, high paying jobs would go to the elite at the far right of the bell curve.
Bell curves are a nice segue into the next part of my article where I present the counterargument or at least a partial counter. Mark uses a bell curve in his article to explain how almost everyone is average. In the curve shown here, anywhere from 68% to 95% could be considered average, more or less. He points out how unrealistic it is to expect to reach the top 0.1% of achievement or ability. I  agree with this. He then goes on to say that it is OK to be average as long as you continue to strive to be better than average. I agree with this too!
That is the end of my agreeing with the counterargument. Now I am going to start shifting back towards my original premise. The bell curve Mark uses in his blog tends to lump everyone into only 3 categories; really bad, really good, and average. I like this curve better (found on an article about assessments and standards in school) and am borrowing it here (with attribution). Mark's approach only allows for a comparison with the 0.1% at either end and then everyone else in the middle being equally average. If we consider the future of work and that perhaps 50% (a random number) of jobs will disappear then being on the right side of average on the bell curve (the blue 34%) means you are still competitive. Our kids do not need to be in the top 0.1% of their vocation, just the top 50%.
While many of our kids will not be the next Zuckerberg or Jobs, by putting in the time and energy they can stay "ahead of the curve".
on April 12, 2021 No comments: