It wasn't until I was out of school and managing other people before I realized the importance of effort. Having kids reinforced that epiphany. If you are going to bother getting out of bed at all then you owe it to yourself to give 100% to whatever you do. This attitude contributes to a feeling of achievement and satisfaction which in turn helps to build confidence; an important attribute for our kids as they compete for the best opportunities. How do we get our kids to recognize this though? 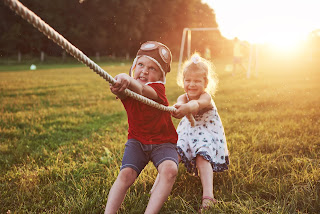 Externally, it is obvious to the people around your kids if they are putting in the effort to get things done. I tried to explain this to my son in elementary school when he was trying out for the soccer team. At age 9, the coach cares more about effort than he does about skill. Apparently, that did not resonate with a 9-year-old view of how the world works but you can't fault a guy for trying.
So, how do you get your child to appreciate this when they are 9 rather than when they reach 35 and wonder why they are not getting that promotion? It may surprise some of you but your kids do listen to you and remember a lot more of what you say than you might think. I still remember an uncle of mine (while I was in the middle of a tantrum about having to wear a tie to church) telling me "Don't sweat the small stuff, save it for the big time". At the time I also remember thinking "Yeah, whatever." I was 8 and did NOT want to wear a tie. But, that phrase came back to me later when I could better understand it. Sure, "don't sweat the small stuff" is not really related to giving 100% but it makes the point. Talk to your kids and give them these cliches often enough to get them hardwired into their soft brains. Here is the wording I have been playing around with related to making an effort:
If you search for "My dad used to say" or some variation of this on your favorite search engine you will come up with quotes from Lee Iacocca, Desmond Tutu, Cameron Diaz, and others. Stuff repeated often enough tends to stick. We may not always act on it right away but it will come back. You can even steal from Disney like I do, "If you can't say something nice, don't say nothing at all." Or, perhaps Dreamworks and the one my kids are more likely to associate with their father, "Better out than in."
I want to add a disclaimer here for all those sideline parents who can get a little crazy when it comes to performance. I believe that there is a right way and a wrong way to say each of the above phrases to your kids. If "Play to Win!" comes out of your mouth in such a way that your kid flinches away from you and feels that you are disappointed with him or disgusted with their effort, you are doing it wrong. The idea is that your child will remember the phrase, recognize that they could have done better, and still believe that you love them regardless. How sad would it be if your daughter went out to the field thinking that if she did not score you would not love her as much?
The HeadhunterDad, AKA Lawrence Kieffer, is a professor of career studies at Temple University, Japan campus, the COO for Fidel Consulting an APAC Recruiting and Staffing firm focused on IT professionals, a devoted husband, and father of two amazing kids. Follow on Twitter, Linkedin or Facebook.
Email Post
Labels: Attitude cliche Confidence example