Grades matter... except when they don't.

I recently finished reading the story of Barbara Corcoran. She famously relates her tale of going from being a D student to owning and running a billion-dollar business rubbing elbows with Donald Trump in the real estate market in NYC. She is not the only one, Simon Cowell of American Idol fame did horribly in school. Further back, Winston Churchill while capable in English was a flop when it came to math and science. OK, so there seem to be some similarities with the above examples, all sales and presentation types, not a lot of scientists showing up here. How about Einstein, Darwin, Faraday, Bell, even Edison? Look it up, they all had problems in school with their studies and grades yet somehow came out on top.
I remember attending a presentation during my MBA reunion a few years ago. The speaker was the former Head of R&D for Honda back when Honda was just getting started in the 1970s. He was retired and a regularly speaker about innovation. His talk at my reunion was no different. While the advice he gave and insights on how to develop new products and "think outside the box" were interesting, the one part of his talk that stuck with me for the last 10 years is what he said about grades and elite college graduates.
He explained that in the 70's, Honda was not well known and they struggled to hire people. Many times they had to take candidates from the mid-tier or lower colleges. Often hiring "C" students. However, he went on, at this time Honda was at it's most innovative. More ideas, more patents, more growth. As Honda grew and gained fame they were able to hire from the best schools and stopped considering the "C" students. What he found over the years was that the elite "A" students were excellent managers but terrible innovators. He explained that the discipline and tunnel vision required to learn and produce the "right answer" all the time in school, either reinforced a pre-existing lack of creativity or outright taught the students to think inside the box. He theorized that the "C" students were more creative because they had more rounded lives growing up. Rather than spending all day, every day studying, they were reading comics and playing baseball and doing stupid things with their friends. All activities that later on gave them a wider range of experiences to draw on when solving problems. 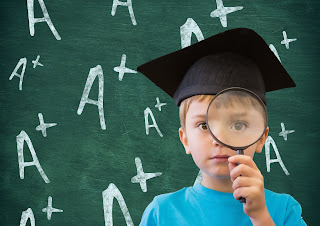 So, when do our kids really need to share their grades anyway? Maybe twice in their lives? Sure, our kids need to maintain a certain level in order to stay in school and not get kicked out but if they can just get by, when else does it matter? College for one, if our kids want to be accepted into a selective college the first criteria they look at will be their high school GPA. After college, maybe the company they apply to will want to see their college grades. There was a convenient survey done in 2007 and reported in the New York Times claiming that 66% of employers ask for GPA and more than half of them would not consider a candidate with a GPA under 3.0. It would seem, that without decent grades our kids cannot get into college and will not get a good job...
Not necessarily. Can you guess what these colleges have in common? Bismarck State College, Boston Architectural College, City University of Seattle, CUNY–College of Staten Island, and Dixie State University? All of them have a 100% acceptance rate for rising freshman. And if you did the math above for companies checking GPAs for incoming graduates you would realize that while 66% of employers do ask for a GPA, 60%* of all employers either do not care about GPA or are OK to consider relatively lower GPA scores below a 3.0 (generally a B). So, yes, our kids can get into college with poor grades and yes, they can get a job with poor grades after college. But that does not mean they are going to be the next Barbara Corcoran or Simon Cowell. What did Winston and Charles and Alexander do that set them apart?
Barbara claims to have had 25 jobs including teacher and waitress before getting started in real estate. Simon started in the mail room, was broke by age 32 and had to move back in with his parents. Churchill led a disastrous campaign while in the military during WWI and was summarily demoted! The more I read the more examples like this come up. Every success story with a struggling start has at least one example of failure early on.
What is the common theme? Perhaps Edison states it best:

Our greatest weakness lies in giving up. The most certain way to succeed is always to try just one more time.

The HeadhunterDad, AKA Lawrence Kieffer, is a professor of career studies at Temple University, Japan campus, the COO for Fidel Consulting an APAC Recruiting and Staffing firm focused on IT professionals, a devoted husband, and father of two amazing kids. Follow on Twitter, Linkedin or Facebook.