When will I know?

As I attempt to navigate through the joys/frustrations/sorrows/hangovers of parenting a teenager through the college application process I am often reminded of simpler days. The gut wrenching fear of seeing him climb to the top of the jungle gym at the age of 4 and the clear image in my mind of what would happen if he were to fall and hit his head on the corner of concrete sticking out from the base holding the pipes in the ground. The embarrassment at the parent-teacher conference in 4th grade when told that he refuses to do his writing assignment like the rest of the class. The ridiculous feelings of pride when he is the only one in his kindergarten class running around helping the teachers clean up at the end of class...

With the college application season in full force there is a feeling that I am being tested as much (or more) as he is on his capabilities and achievements up to this point. Did we (my wife and I) prepare him properly for college? Did we push him enough to study hard and get good grades? Should we have signed him up for karate and clarinet when he was 3 and then made sure that he did not quit? We look at him and can't believe the amazing young man that he has become in spite of all of our mistakes. 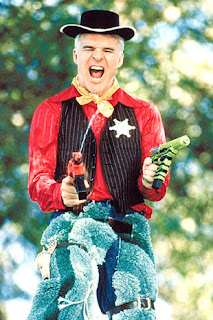 The same insecurities, "Are we doing a good job", that we felt when he was 17 days old are unchanged and just as present now as when he is 17 years old. A line from a classic Steve Martin movie has been replaying in my mind (Parenthood). The scene has Steve Martin as an adult and father talking to his own father about parenting and the older man says that when it comes to being a parent...

"It never ends. There is no ‘end zone.’ You never cross the goal lines, spike the ball, and do your touchdown dance. Never.”

Which neatly sums up my own question these days although perhaps not as fatalistic as the Parenthood quote. I am not looking for an end to the caring and responsibility and I wholeheartedly believe that he is a fantastic young man... but I am wondering when I will know for sure that I have done well. Is there a day in the not too distant future when Ed McMahon shows up at my door and says "Congratulations! your son is going to be OK, you did a great job". Is that what the college admissions circus is all about? When he receives his acceptance letter from Yale or Harvard or Stanford is it going to be addressed to me instead of him with a nice letter of congratulations?

Of course not, college is just another step on the trail for my son and not an end. But I can't help feeling that if now is not the time, when will I know?