How much of what we stress about with our kids could be resolved by eliminating this two-letter word from our vocabulary? If I look back over the last 20 years of parenthood, the most stressful moments inevitably revolved around me telling one or both of my children to do something or alternatively to stop doing something. I am sure that my efforts were both effective and necessary in some cases. "Don't cross the road without looking both ways and waiting for the light." for example is something I did not want to leave for my kids to figure out through trial and error. But, along with the obvious life-saving restrictions were many MANY situations that were not clearly necessary. Did I need to tell my son to walk on the sidewalk instead of dancing along the edge and climbing on the low wall next to it? Was it soooo terrible that my daughter wanted to play in the sandbox even though it was soaking wet from the rain earlier that day? 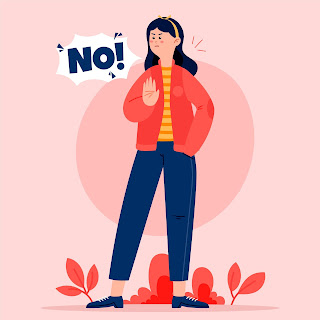 My fear is that the denials and restrictions are affecting their personalities in ways that could have a negative impact on their futures. Attributes like creativity, confidence, curiosity might all be curtailed. If a child is told to stop every time they think of something new to do or try they will very quickly come to mistrust their own instincts. Acts that arise from creativity or curiosity and are promptly halted or worse, punished would no longer be viewed as "bad". Martin Seligman in his experiments in the '60s showed that dogs who were shocked right after a bell was rung started to react to the bell as though it were the shock itself. Repeated conditioning in this way will result in our kids being hesitant, self-doubting and passive.

Back when I was in high school, the HeadhunterDad's Mom was studying for her Masters in English Literature, and for one of her assignments, she was reading a book titled Last and First Men. She told me about how it followed the evolution of mankind from our current civilization to the distant future, more than two billion years from now. I tried reading it back then but could not get through it. I picked it up again a few years ago and was able to finish it. I remember one iteration of the evolution clearly and while horrifying, it also held a strange appeal that I grew to appreciate more having had teenagers of my own. In this version of humanity (some million (billion) years from now) the youth, upon reaching puberty, were expelled from the towns and cities where the children and adults lived. Lifespans were much longer by that time and adolescence could take decades to get through. During that tumultuous time, the crazed teens lived a violent and decadent life of excess. They formed tribes, mated randomly, waged war, and generally ran amok. With no parents or other authority figures present they could let loose all their hormonal-driven urges. Those who survived, eventually returned to the cities with a calm and maturity having outgrown the wild years and I guess, "got it all out of their system."

This may sound eminently reasonable from a societal perspective but I am sure the parents of the teens who do not come back from the wilds would disagree. So, we probably won't be seeing this Lord of the Flies scenario played out anytime soon but perhaps the idea is correct for a younger age group? Ones who are not quite big enough to hurt others with their experiments. Perhaps we can allow our toddlers and elementary school-age kids to live a bit freer than we are currently permitting. Let them experiment, explore their world, and learn to trust their own decisions.

The HeadhunterDad, AKA Lawrence Kieffer, is a professor of career studies at Temple University, Japan campus, the COO for Fidel Consulting an APAC Recruiting and Staffing firm focused on IT professionals, a devoted husband, and father of two amazing kids. Follow on Twitter, Linkedin or Facebook.